Ahhhh, the ‘eye of the storm’. A magical time here, it describes the brief window typically between 2 and 5 pm when all the hungover stragglers have finally made their exit, and the early rising go-getters are not yet back. Free from the typical chaos, the eye of the storm is my time. I usually can use this time to relax, sleep, or complete any/all productive output for the day. Usually. But not on this day.

My sanctuary this afternoon was shared by one lone guest: Mei.
Mei is from Taiwan, has the frame of a FAS baby, and makes Napoleon Dynamite seem outgoing. She speaks English worse than Chow from The Hangover and all her outfits remind me of Hello Kitty, down to the bow in her hair.

Mei also doesn’t drink. That is, until last night, when she had what was determined to be her first beer ever. This resulted with her consistently starting at me. At one point she made an attempt to come over and sit next to me. But quickly retreated, as if embarrassed by the other people around. So it remained-No words, just looks. Seductive, sly looks, cast from the opposite end of the room. Well, I think they were seductive. I can never read Asians. Something about the eyes.

So it began. I was in the living room, on my computer, ‘on the clock’ writing some articles for a guy in Oregon. ‘On the clock’ meaning watching re-runs of Californication. Fuck him if he thinks he can underpay this type of talent.

I hear Mei shuffle into the living room. Hank Moody will have to wait. I pause and look up:

Her face is slightly covered. The way she is blushing you would have thought someone asked her to pronounce ‘hello’ correctly. Stroking her hair nervously, not saying a word, she crept closer. Once sitting at my side she said:

Mei: “Brent, I must to tell you something.”
{I was taken aback as this doubled the number of words we exchanged over her whole stay.}

About half way to the bedroom she attempts to clarify:
Mei: “….I…..I have….well……I don’t know how to say it….” at which point she points down to where her pant legs meet, colloquially known as the crotch.

Well Damn. That’s a bit direct. I had actually seen this move before. I think. When? Yes! it was a girl from Thailand not even a month earlier. Who said Asians are shy?

My mind leapt where any male’s would:
Is anyone home?
What about protection?
When will they be coming home?
And most importantly: Will this make a good story to my friends?

Still not 100% convinced, I again paused.

Well, there it is. I commend myself for correctly reading last night’s gazes.
This is like a Dominican teenager playing little league. It’s just not fair.

As I pass through the frame of the door, Mei points to the bed.
OK then. I guess it’s decided.

My head turns to the bed.
My eyes fail to register what is in front of me.
My mind comprehends, panics, “WHAT! THE! FUCK!!”
My mouth repeats this out loud, as often happens.

I felt a burst of sweat. I am going to vomit.

My head rotates to Mei, back to the bed, and quickly away. This cannot be real. No fucking way. My body overreacts, sending a wave of chill up my body. Fuck That. No way. I glance back to the bed confirm what I don’t want to believe.

HUGE, WET, SHIMMERING, BLOODY, BLOOD. at LOTS of it.
This foul fluid, located directly in the middle of a once white mattress. Pooled there, mocking me and my assumptions.

Me and blood mix about as well as Whitney and a heated spoon. Nurses lay me down before taking blood because the sight causes me to faint. I don’t even like tomato juice because of the resemblance.

And this was no ‘spotting’. A vampire could have retired. A sea of leaches would have left satisfied. The fucking chupacabra would have showed its face to get at this feast.

My mind goes in circles:
Blood?! What the FUCK.
PERIOD blood! ARE YOU FUCKING KIDDING ME?!
FUCK YOU MOTHER NATURE.
I again feel sick.
I cannot remain near the room.

Falling over my feet backwards out of the room, I somehow managed to keep my lunch in its appropriate place.

Regaining my vision and again standing up straight I look to Mei. Her face was the color of the mattress and tears were flowing from her eyes. With good reason.

However, I’m not a terrible person. As quickly as I was disgusted I also realized this was extremely embarrassing for Mei. After some moments to recollect myself, I made my best effort to assure her it wasn’t a big deal. While not letting the mattress enter my line of sight.

Staying true to Asian stereotypes, she spent a good hour and a half attempting to clean up her mess, using every type of bleach, baking soda, and sponge we had. (why the FUCK she didn’t do that BEFORE showing me, I will never know)

Wanna see a pic? Click arrow on right. And that was AFTER over an hour of Asian cleaning. 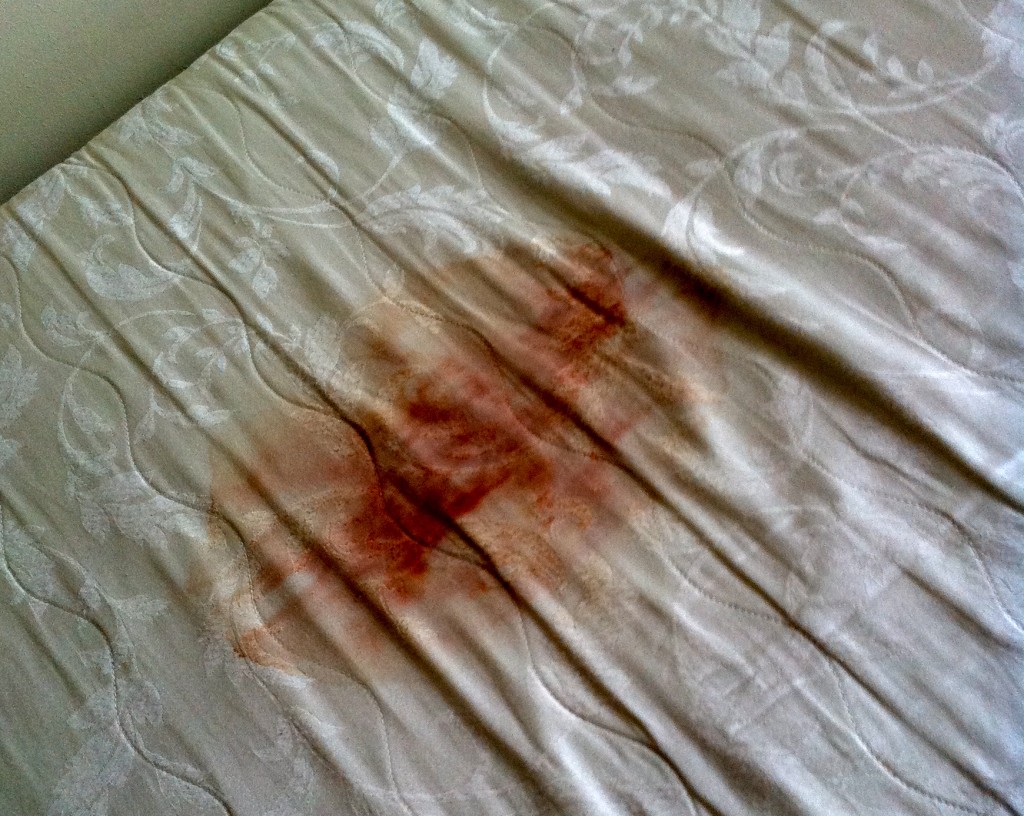 Finally forfeiting, she offered to pay for a new mattress. I accepted, quoting and collecting a slightly exaggerated amount. Hey, fuck you and your judgment. I didn’t go into this day bargaining to see a murder scene.

After she left, I did what any decent human being would do: I flipped that mattress over, marched to my roommate’s room, and pulled the ole swap-a-roo.

He still sleeps on it to this day. Well, until he reads this anyway.